Today on International Women’s Day we recognise the less glamorous side of cooking and heating with wood in the Majority World.

For many of us cooking and heating with wood is a quaint luxury. The smell of wood smoke evokes cosy country pubs. However, around half the world’s population rely on wood as their primary (or only) source of energy. That’s 3 billion people; around 500 million homes and hearths.

The reality for many of these is that wood is an energy source that is hard work, inefficient, polluting, unhealthy, increasingly scarce, and places strain on the local and global environment. Most recent data published in the Lancet, household air pollution is responsible for a staggering 2.6 million deaths annually, and there is plenty of evidence that wood fuel contributes to deforestation.

Women and children disproportionately bear the brunt of the challenges of wood use, often being responsible for collecting it, and spending hours near to open hearths each day breathing in the toxic fumes. 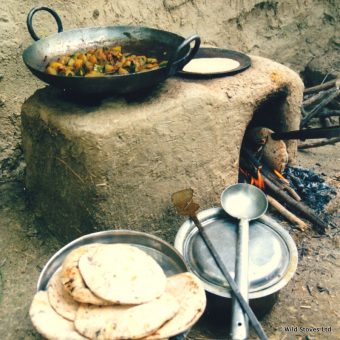 There is good news though… For decades organisations around the globe have been working to develop cleaner burning, more efficient wood stoves to replace the classic ‘three stone fire’. Rocket Stoves and Woodgas technologies, as well as solar cookers and biogas can all provide a part of the solution. Cleaner-burning cooking stoves can significantly reduce the burden of wood collection, time spent cooking, and even expenditure on wood fuel for women.

This is where many of the technologies that we promote have emerged from. Wild Stoves was conceived during a research project in Nigeria led by its founder, Jonathan. He has spent most of his working life studying the impact of wood energy on people and the planet in Asia and Africa. He had a eureka moment and realised that technologies that burn wood cleanly could also help displace fossil fuels back here in Europe, as well as engage people with their environment. And so it began.

Wild Stoves has donated thousands of pounds through its Foundation over the years, which diverts funds to excellent projects to benefit those for whom wood is not a luxury.