Exploding rocks under a beach fire

I was out enjoying a fire with friends on the beach last night when suddenly the fire exploded, filling the dark sky with a spectacular shower of sparks. We were all fine, laughter soon returned, and the fire was regrouped – now on a sandy base under the pebbles. However, we realised we’d been lucky to avoid being hit by any shards of rock, and that none of us knew enough about how to site a fire on a stoney beach.

We had sited the fire on a flat rock, rather than the pebbles that covered the beach, mistakenly reasoning that a larger rock would splinter with less vigour than smaller pebbles. I’ve spoken with a few fire-sages and done some reading since, and want to share some wisdom to help others avoid this.

What causes rocks to explode?

Water expands by about 1600 times when it heats up and turns into steam. If it can’t expand as it heats up, the pressure builds. In a stream engine this is very useful for setting hundreds of tonnes of train in motion. In a rock it’s sufficient to blow it apart with a great deal of force.

Water trapped in rocks are what causes the exploding risk, either:

Heating rocks rapidly does not allow time for moisture to escape even from porous rocks. The pressure builds, and hey presto, the rock explodes. 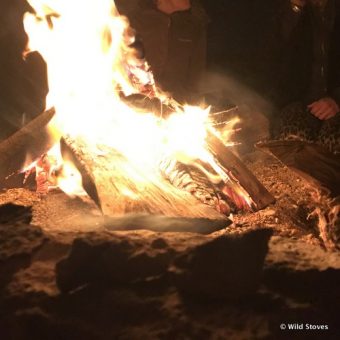 Which rocks are safe to light a fire on?

No rocks are completely safe, but certain rocks are less likely to blow if they’re dry, have been resting above ground, are not porous or ‘layered’, and not smoothed from the action of water. Sound lumps of granite and marble are among the better choices.

However, having located and examined the shards of rock that were ejected from the face of our slab, I’ll be avoiding rocks under any fires altogether. There are usually work-arounds.

Keen to continue our moonlit beach fire, we scraped back the larger pebbles to reveal much smaller sandy shingle which didn’t pop at all: fires on sand have always been OK for me. Other friends from the Jurassic Coast have spread a little coastline soil or clay over the rocks for a makeshift firepit, offering a thermal (and blast) barrier between the fire and the rocks.

Another way, of course, is to carry a firepit to the beach. But sometimes it’s those spontaneous fires that are the best…